The Evolution of an Indie Author ~ by Kathrin Hutson

After just over four years of officially calling myself an Indie Author with published works out in the world, I finally feel like I’ve come far enough in those four years to look back on them with a somewhat more detached, objective, amused perspective.

Don’t get me wrong—the ups and downs of my journey as an Indie Author, even my journey as a writer in general, have been rugged and many. It’s one thing to self-publish a book, celebrate in that accomplishment, and call it a day. For some writers, that’s huge and important, and it’s good enough for them. And there is nothing wrong with that in any sense whatsoever. For those of us who have always dreamed of becoming full-time authors and making a career out of writing fiction, the road to that goal is a lot longer, a low more harrowing, and takes a lot more work.

It doesn’t happen overnight (for most of us). It doesn’t happen with the first book and probably even with the second (for most of us). The transformation from Indie Author to Indie Publisher—a career author writing, publishing, marketing, and continuing one’s own books—takes a lot of time and dedication. It takes a thick skin, an ability to roll with the punches, and above all, a desire to “make it” that is stronger than the occasional doubt in what we’re doing and the overwhelming urge to just give up.

I could say that I haven’t faced that urge to lay down the pen and the paper and toss my Indie career to the curb. I’d be lying if I said there haven’t been moments of intense frustration, let-down, exasperation, and overall cluelessness in the last four years. But I might also say that I gave into that pressure of “abandoning the author dream” before I ever started my author career.

When I was twenty, with the help of a few institutions both private and public, I finally managed to overcome an opiate addiction that had steered the course of my life for two and a half years before that. Just like reaching the decision to become an Indie Author doesn’t automatically make someone a bestseller and a household name overnight (again, for most of us), I did not make the transition from being an addict to becoming a fully functioning, right-minded, confident and surefooted adult in one day. Not even in one year.

It took me two years before I finally realized I was ready to leave the place in which I’d reached my recovery and managed to start putting my life back together again. Oddly enough, or maybe not, that moment came when I met a man battling his own demons and recognized myself in him immediately. He moved in with me after two weeks of dating. Three and a half months later, we’d given away all our things, packed our bags and “the important stuff” into my Nissan Altima, and drove across the country from Colorado to South Carolina in 25 hours straight. No hotel. No sleep. We were in our early twenties and completely invincible.

That man is now my husband, we’ve been married for five years, and we have a three-year-old daughter. We’ve lived in two other states since then—California and Vermont—and are planning to make one more very large and hopefully slightly more permanent move in the next eight months. And that building of a life took time, trying new things, learning what works and what doesn’t, accepting help, offering help, changing the way things are done, and compromise.

My career as an Indie Author is exactly the same. And in the same way—just like with all the frustrations, defeats, moments of terror and self-shaming and overwhelming confusion I experienced in my late teens and early twenties—I can look back on my budding author career with a nostalgic amusement and laugh at all the things I thought were such a big deal.

When I got clean in my twenties, it took me four years to finally give myself the permission I needed—deserved, longed for, denied myself as punishment, and simultaneously rejected—to start writing again. It felt like starting from scratch. I was terrified that after not really having written anything worth showing anyone for about five years and nothing at all for four years, I’d somehow “lost my ability to write”. In 2014, when I sat down at my computer again and took another stab at it, I proved myself wrong one more time.

Being an Indie, for me, has taken very much the same path. Like many aspiring authors, I wanted so badly for my first book to stand out, to make waves, to be special and unique and catch someone’s eye. I submitted it to 116 traditional publishing agents in the hopes that someone would fall as much in love with it as I had. I received 116 rejection letters and filed them all away for safekeeping. Then I made the decision to go the Indie Author route, because—as I used to describe it back then—“I’d exhausted all my other options.” 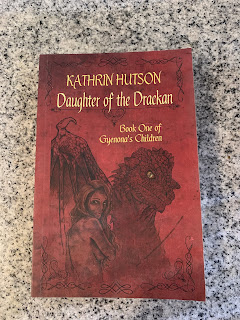 Daughter of the Drackan, the first book in the Gimdark Fantasy duology Gyenona’s Children, was released on October 15th, 2015, with a horrifying cover. And when I say horrifying, I mean it was awful. I had no idea what I was doing. I’d gotten just enough guidance from one man I’d seen once in person (he worked at our Co-op grocery store in Grass Valley, CA) to feel like I had enough information to start this Indie career of mine with a bang. I was so wrong.

People loved the story. To date, I still haven’t gotten anything lower than a four-star review for this book. But the cover was killing me, and all the people who loved the book and saw it for what it was meant to be (very intentionally on my part) commented on this fatal mistake. So, in 2016, just after finding out I was pregnant with our daughter and preparing to launch the second half of Gyenona’s Children in Mother of the Drackan, I decided to redo the covers. I wanted them to look realistic and still “old-school”, reflecting the feel and format of so many older book covers like The Lord of the Rings and The Sword of Shannara and The Sword of Truth.

Just a month after I released Mother of the Drackan and its prequel with the new cover, Daughter of the Drackan—the same book that had earned me 116 traditional rejection letters—became a Dark Fantasy bestseller on Amazon. Talk about a morale booster. And at the same time, I had this itching, tingling feeling that I could do so much better. So much more. I had to at least try.

Lots of other writers in my “circle” at the time asked me how I managed to reach the Dark Fantasy Bestsellers list, and honestly, I didn’t have an answer. Maybe it really did happen by mistake, but in all likelihood, I probably just wasn’t paying attention. I knew even then that this wasn’t the way to go about things if I wanted to turn writing fiction into a full-time career. So I made the commitment to start mapping out the things I needed to do to be “bigger and better” than I had been for those twenty months.

The only thing standing in my way in 2016 was the fact that I was literally growing another human being inside my body and had zero brain cells left to devote to writing. The irony wasn’t and still isn’t lost on me. I wanted to create worlds and craft story, to make people feel something—my own “book babies”, if you will—and it was a mental and physical impossibility with a real baby on the way. So I just let it be.

2017 was a year of learning how to be a mother, of how to view the world differently through the lens of not what was important to me anymore but what was important to pass down to my daughter. I wanted to spend as much time with her as I possibly could, to stay within this bubble of being a mom until she was old enough to go to preschool. I’m not ashamed to admit that by the time she turned one, I was really ready to do my own thing again.

In January 2018, I made the commitment to write 1,000 words of fiction every day, Monday through Friday, no matter what. At that rate, I calculated being able to write a complete and finished a draft of a book in fourteen weeks, which felt like absolute insanity. But I did it. Once, twice, three times, and The Unclaimed trilogy was born. Things were looking up. I now had more than one completed series under my belt, and I’d proven to myself that I could take that insanity by the horns and turn it into my own version of success. 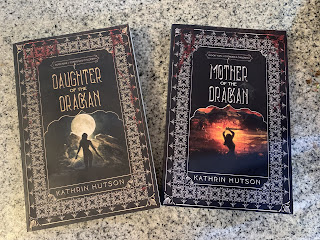 Daughter of the Drackan and Mother of the Drackan got new covers as well because I realized the importance now of branding myself and my fiction, and I thought I was close to what these books needed in terms of visual allure. Maybe I was close. But I wasn’t there yet.

Then I wrote and released Sleepwater Beat—the first book in the Blue Helix series—that same year, and everything changed.

2019 has been a whirlwind of learning, growth, success, out-of-the-box thinking, and an overwhelmingly different reaction to my work and my stories than I’d previously received. Book sales soared (in comparison). My social media followers skyrocketed (in comparison), and people actually wanted to get to know me, the author, on a more personal level. I started putting myself out there for the world to see in live videos and talking about all the things Dark Fantasy, Dystopian Sci-Fi, and general nerdy-book-lover-related.

I was contacted by a publicist who loved what I was doing and wanted to work with me.

Daughter of the Drackan was nominated for an EFFY in the 2019 Epic Fantasy Fanatics Readers Choice Awards.

And Daughter of the Drackan got a fourth and (it feels like) final cover. 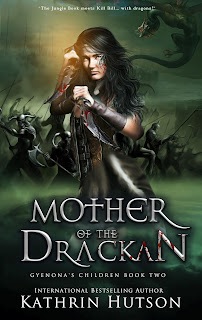 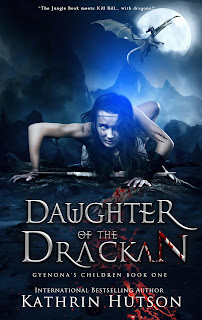 2020 is bringing huge things for me. I feel it, but more than that, I can look at where I started, where I’ve been, and where I am now; the patterns and the trajectory are only too clear in hindsight, just like they are when I look back at the defiant, angry, heartbroken, resilient version of myself as a twenty-year-old who had no idea what was coming next. But she kept going anyway.

I can laugh at all of it, because I know I wouldn’t be where I am today if I hadn’t been where I was four, three, two years, even one year ago.

If there’s anything I hope other writers take away from this article, it’s this: nobody gets to where they want to be with only one step (unless, of course, the only place you want to go is one step ahead of where you are now). And that once you start, the possibilities are endless as long as you just keep going.

Even if you have no idea what you’re doing.

Thank you so much for having this guest post up on your blog, Kristine. I loved our chat on Wordplay, and I can’t wait for next time!